The National Group comprises of leading companies in the mining, resources, transport and logistics industries. Through Wolff Mining, the National Group has expanded its range of semi-autonomous equipment, with plans to implement fully autonomous drills in the near future.

Wolff Mining, part of the National Group is well known for its range of automated and innovative solutions, such as large-scale satellite bulk dozer push and semi-autonomous blast hole drilling. The company has worked closely with Caterpillar in order to implement and optimise semi-autonomous tractor system (SATS) technology, in a world-first application into a mining production environment.

The collaboration with Caterpillar on Cat Command for Dozing and optimisation of satellite technology for large-scale bulk dozer push operations has given a single operator the ability to control up to four dozers at one time, putting Australian mining companies one step closer to fully autonomous mining operations in the future.

The development and implementation of fully autonomous drills is next on the horizon. National Group managing director Mark Ackroyd is excited for the future and plans to embrace this key technological advancement.

“We are known for the dry hire of mining equipment and drills are no exception” Ackroyd tells Australian Mining.

“With Wolff Mining’s drilling services, we are building a first-class business through low hour rigs, experienced operators and supervisors.

“Like Wolff Mining’s work on Cat Command for Dozing, drill technology is currently being developed and optimised.

National Group predominantly offers Caterpillar drills, with the OEM leading the way in innovation with its next plans being to release these fully autonomous drills to the market.

At present, the Cat semi-autonomous drills allow operators to automate the drilling function itself, but manual input is still required to set the drill for the next hole after completing the drilling of the first.

Although fully autonomous drilling is still in the future for the Australian market, National Group, with Wolff Mining, remains focussed on its current role of supplying the industry with heavy mining equipment, including blast hole drills and drilling services, to prepare drill holes for subsequent blasting.

As is the case with the hire of heavy earthmoving equipment it supplies, National Group, through National Plant & Equipment offers dry hire of drill rigs, with Wolff Mining offering wet hire of drills, blast-hole drilling and contract mining services.

“Like most of the heavy earthmoving equipment we supply, we intend to supply the highest quality new and used drills, along with superior service that exceeds market average drilled metres per rig at a competitive price,” Ackroyd says. 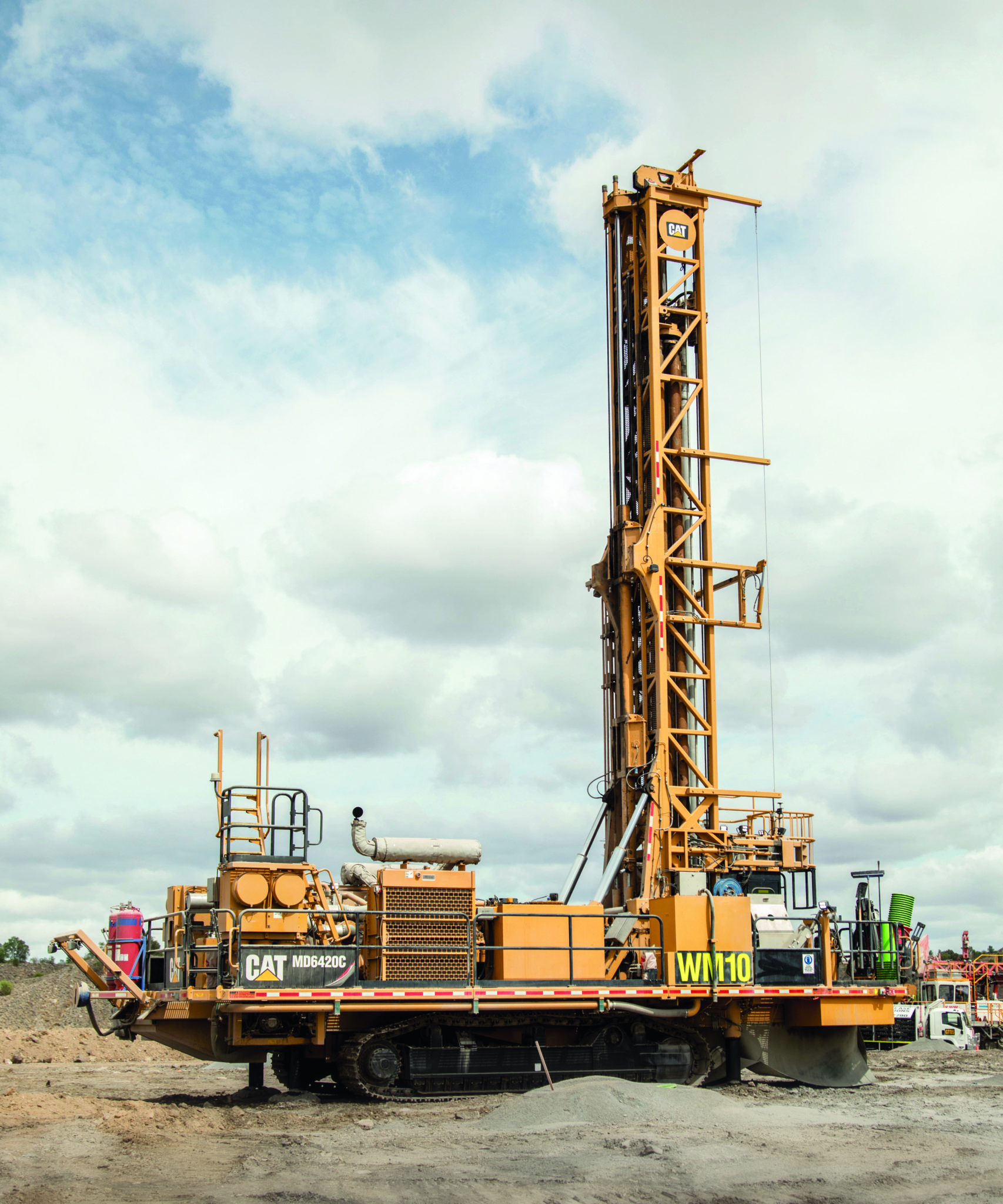 Hastings Deering product manager – rotary blast hole drills Adam Davis says Caterpillar will release a range of fully autonomous drills with the ability for one operator to control up to three drills, much like the semi-autonomous tractor system technology works for dozers.

“An operator will be able to perform non-line of sight operations from a control room, with the added ability for multi-pass operations,” Davis says.

“Each of the three drills can also be set to unique drill patterns, enabling one operator to automate the drilling of multiple holes and patterns at the same time, all at the push of a button.”

Fully autonomous drill technology has been in full development and has come a long way, with this technology to be available to mining companies in the near future.”

Caterpillar drills available for hire through National Group include the Caterpillar 6420 B and C models, which have a mast range of up to 12 metres and the ability to drill holes from 229-310 millimetres, vertical depth of 74.6 metres and providing typical drill rig metres of around 25,000-30,000 metres per month.

Another model available through National Plant & Equipment is the MD6420C, which can be boosted to a higher level of automation with Cat MineStar Terrain for remote, real-time monitoring of drilling activity and blast planning.

Cat MineStar Terrain guides the operator through the job to improve their accuracy of drilling depth and hole placement, while providing feedback of the geology of the area being drilled.

“We offer a key point of difference, namely low-hour drills, which have all been purchased new and maintained per original equipment manufacturer (OEM) requirements to achieve market-leading availability and utilisation,” Ackroyd says.

“The National Group also has one of the lowest drill operator turnover rates in the Australian mining industry at less than 5 per cent, which is well below average.”

National Group offers Caterpillar drills due to their long life and low total ownership costs, which gives the company’s clients easy maintenance and more uptime on the job, leading to safer and more comfortable drilling.

Some of the advanced features of the Cat drills available for hire through National Group and Wolff Mining include improved fuel efficiency, electro-hydraulic controls for increased operator safety and computer-controlled drilling.

Cat drills are also autonomous-ready, through integration with mine management systems, communication networks and safety systems.

This includes a new contract to deliver a range of drills to one of National Group’s Tier 1 clients in Western Australia, with plans for further growth in the Australian and international drill market.

“We operate Australia-wide, predominantly servicing clients based in the Bowen Basin and Pilbara (and) we plan to expand our presence nationally and internationally in the near future, with our expansive range of semi-autonomous and fully autonomous drills,” Ackroyd says.

“In the future, we are looking to leverage Cat’s automation technology into the drill fleet, very similar to how Wolff Mining has applied the SATS technology to our dozers, with one operator controlling multiple drills.”